A weekly newsletter on Indian politics and policy from Scroll.in, in your inbox every Monday.

A Substack newsletter by Rohan Venkataramakrishnan

The Political Fix: Here’s what India’s chaotic attempt to lock down 1.3 billion people looks like

A weekly newsletter on Indian policy and politics from Scroll.in.

Welcome to the Political Fix by Rohan Venkataramakrishnan, a weekly newsletter on Indian politics and policy. To get it in your inbox every Monday, sign up here.

If you want journalism with spine not spin, consider supporting us either by subscribing to Scroll+ or contributing to the Scroll.in Reporting Fund. 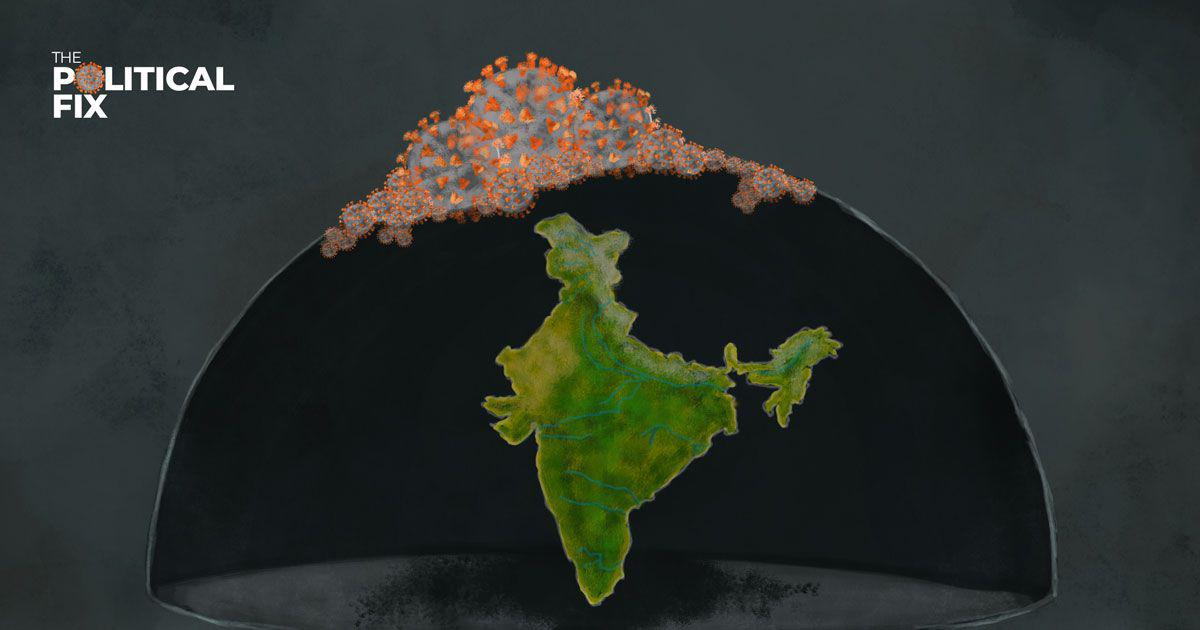 The Indian state looms large over the lives of every resident. That is because it can be demanding, has tremendous discretionary power and is very hard to comply with. But being intrusive isn’t the same as being capable.

For all the talk of how big the state is here, India actually has very limited state capacity.

“When it comes to the state’s core sovereign functions – revenue collection, public goods provision, public order, and justice – the Indian story is one of scarcity rather than surplus,” wrote Milan Vaishnav in 2019.

Two weeks ago, on the newsletter, we discussed how the outbreak of coronavirus would put all of India’s state systems to the test.

At 8 pm on Tuesday, Prime Minister Narendra Modi announced that this test was coming much sooner than many expected.

Giving people less than four hours to prepare, Modi said that all of India was going into a complete lockdown from midnight for three whole weeks. There would be no flights, trains or buses, and everyone was asked to stay home.

While a third of the world’s population is currently be under lockdown, the Indian experience is unique for two big reasons (and worrisome for a third):

And Covid-19 is the mother of all outside shocks.

We got an immediate taste of this right after Modi’s speech on Tuesday, when – far from staying at home – tens of thousands of people immediately set out to panic buy provisions, because the prime minister did not explain how people were supposed to access food during a 21-day lockdown.

Modi had to take to Twitter afterwards, posting “THERE IS ABSOLUTELY NO NEED TO PANIC”, which is about as clear an admission of communication failure as you will get from this government.

Any policy observer or bureaucrat worth their salt in India will tell you the other thing that is likely to happen in the face of a prolonged lockdown: the country’s massive internal migrant population, a huge portion of which relies on daily wages for sustenance and does not have a social security net to fall back on in the cities, will head home. Indeed, demonetisation itself was a good example of this.

Moreover, in the week before Modi’s lockdown announcement, migrants had already begun rushing home, and the Indian Railways even arranged special trains for them to do so.

With buses and trains not plying during the lockdown, and the government failing to reassure everyone that they would be provided with essential services and shelter, hundreds of thousands of migrant workers began to walk home – willing to brave a journey that was often hundreds of kilometres long.

This forced state governments to organise special buses to pick them up. But even that led to huge crowds gathering at the bus stops. If the lockdown was meant to keep people in doors and prevent the virus from spreading, the gatherings of migrants seemed likely to assure the opposite result.

Only on Sunday did the Centre belatedly issue an order banning all inter-state travel and insisting that landlords who evicted tenants would face punishment.

But it also suspended several bureaucrats from the Delhi state administration and ordered governments to treat any migrants attempting to get home as criminals. This recipe might lead to even more violence on the streets. The first days of the lockdown already resulted in the police attempting to use lathis and even guns to try and enforce the lockdown.

MEHFIL-E-JAMIA @JamiaMehfil
A female post graduate doctor was slapped by khammam police ACP Ganesh yesterday while she was attending night duty, she was abused saying "with whom are you going to sleep at this time?" @KTRTRS please take strict action against him. #PoliceBrutality

And this is just the immediate state capacity crisis, caused by the government’s failure to plan for large-scale migration that was set off by the lockdown announcement.

There are also the difficulties of the lockdown itself: the first few days aw supply chains of essential services like food and medical equipment broken, not least because the police was using violence or demanding bribes from anyone on the roads. (I wrote about how the Indian police needs to understand it cannot beat coronavirus with a lathi).

There are concerns about starvation and whether food will reach everyone who needs it. There are fears that those who need emergency medical care not related to Covid-19 may end up abandoned.

Finally, there is the worry about the massive economic disruption that the virus and the lockdown will cause, and whether the government – already struggling with the lowest growth in a decade – can do enough to revive the economy.

A few announcements have already been made (read my analysis here), but much more will need to be done. One worrisome indicator from Finance Minister Nirmala Sithraman’s announcement of a welfare package: she insisted that her ministry had “responded” to the lockdown “immediately within 36 hours”. Couldn’t the relief package have been announced alongside it (and go some way towards limiting return migration)? Why did she have to “respond” to it?

The limited nature of the Indian state, made even smaller by the Bharatiya Janata Party government’s penchant for grand announcements with little planning and its unwillingness to accept suggestions from a broad spectrum of voices means we are already amidst a full-blown crisis – even as the disease itself hasn’t reached anything close to the numbers we are seeing from other countries.

Of course, amidst all of this, Shoaib Daniyal points out that the Bharatiya Janata Party’s politicking carried on as usual.

At the start of the week I looked at whether India had rushed into a lockdown or didn’t have a choice
because of its limited healthcare system. The debate on this is starting to resemble the one around demonetisation.

At first, that move received mass support, though many complained about how badly it was implemented. Over time, however, analysts and observers pointed out that the idea was itself flawed and so there was no way it could have been implemented well.

The failures in planning for and implementing Modi’s 21-day lockdown are already evident, as we approach the seven-day mark. But many are now pointing out that even with better planning there was no way for the Indian state to successfully pull this harsh lockdown off without causing mass pain, and that the country should have had a much more nuanced, location-specific set of measures.

We’ll definitely be returning to this debate.

Manish is a Research Associate at CPR and a graduate of the National Law School of India University, Bangalore, who focuses on questions of development, policy and law in the context of migration, transport, urban planning, livelihood and gender as lived experiences in the city. A special train from Bombay's Victoria Terminus station is filled with people fleeing the plague.

Have recommendations for an article, book, podcast or academic paper that deals with Indian politics or policy? Send it to rohan@scroll.in. Previous recommendations from the Political Fixare collected here.

Earlier, Aarefa Johari’s investigation revealed how the government’s curious approach to sourcing crucial protective gear for healthcare workers on the frontlines of the Covid-19 crisis – including circulating the tender only among a few companies – led to inordinate delays and a shortage.

That is the kind of shortage that could take lives, since anyone coming into contact with a Covid-19 patient is at risk of getting infected themselves – and infecting others.

Though the government has since resolved some of the concerns with its approach, the sudden announcement of a 21-day lockdown and the failure to plan for essential items has meant more delays in the production of this key equipment.

“Just two days ago, one of my workers got beaten up by the police on his way to the factory, before he could even get a chance to explain where he was going,” said Siddhant Aggarwal, a director of Cartel Healthcare, a manufacturer of medical protective wear in Raipur, Chhattisgarh. Aggarwal’s company has the capacity to manufacture 100 coveralls per day, as long as his employees are able to make it to work amidst the lockdown.

“The workers are now very scared of coming in, even though we are providing transport for them and are trying to motivate them as much as possible,” said Aggarwal.

You can find all of our coronavirus coverage – from analysis of Modi using crisis management to buttress his image to how the riot-hit neighbourhoods of Delhi are facing the brunt even harder – here.Additionally, our daily updates are here.

And we have also started a series called the Art of Solitude, to help get you through these homebound times.

And as you read, a reminder – journalism, which is especially needed in times of crisis, is not cheap. To help ensure our reporters can dig deeper and go further, you can support us subscribing to Scroll+.

What we need right now are not measures but uniform outcomes. CPR’s Yamini Aiyar and Mekhala Krishnamurthy argue in the Hindustan Times that command-and-control will not work as a response to this disease, and that the Centre will need to ensure agility, flexibility and adaptation to take it on.

Beware of a lopsided lockdown, with the pain falling heavily on the poor. Jean Drèze writes in the Hindu about how the state must ensure support to India’s needy masses rather than penalising them for struggling in this moment of crisis.

India’s vast pool of migrants have always been invisible to policymakers. So says Tariq Thachil of Vanderbilt University in this Twitter thread, about how the failure to account for them during the lockdown fits into a longstanding pattern. Meanwhile, IIM Ahmedabad’s Chinmay Tumbe looks at migration patterns to suggest where the virus may emerge next.

This pre-print paper suggests that 21 days will not be enough. Without even considering the number of potentially asymptomatic patients, Rajesh Singh and R Adhikari argue that India will need at least two or three periods of lockdown, or one much longer one, to tame the disease.

The Centre’s financial package may sound impressive, but it leaves huge swathes out. P Vaidhyanathan in the Indian Express points to the gaping holes in the welfare package meant to mitigate the pain of the lockdown.

Can’t Make This Up

There have been many coronavirus songs. There was a Supercalifragilistic adaptation and Kittho aya Corona, Stayin’ Inside and the, uh, viral Vietnamese handwashing video.

But this snippet of Bappi Lahiri’s corona song gets me everytime. (If you don’t know Bappi Lahiri, he’s the synth-and-disco king of 1980s who is always pictured with lots of gold bling, and whose songs seem to be evergreen).

Send more coronavirus songs, as well as reports, op-eds and other links, to rohan@scroll.in. And if you like this newsletter, please share it!